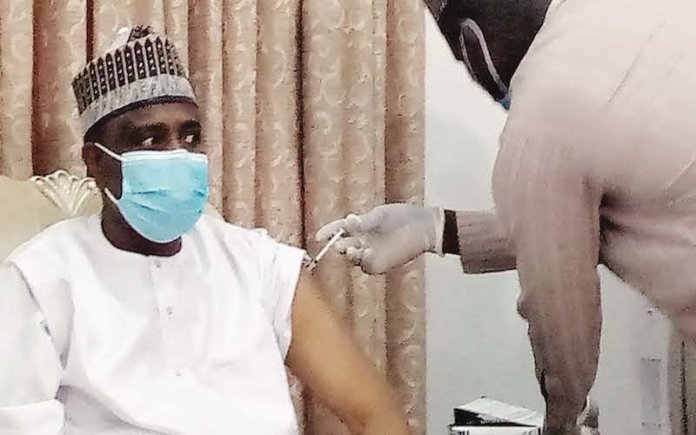 In Sokoto, the Commissioner of Health, Dr. Ali Iname led a team of medical personnel to administer the vaccine on the governor at the Government House, Sokoto.

Tambuwal took the jab alongside the Deputy Governor, Alhaji Muhammad Dan’iya and other top government officials in the state.

Speaking after taking the vaccine, Tambuwal implored the people of the state to make themselves available for the vaccination.

He, therefore, enjoined the people of the state especially the vulnerable to come forward and be vaccinated against the deadly disease.

He further explained that prevention “is better than cure. Instead of running here and there in need of support, it is better to take preventive measures to ensure that everyone is vaccinated.”

Emmanuel, who was represented by the Secretary to the State Government, Dr Emmanuel Ekuwem, said no report of life-threatening side effects has so far been recorded.

The state government on March 10 took delivery of 69,030 doses of the AstraZeneca COVID-19 vaccines from the federal government.

The governor lauded the efforts of scientists and researchers who made concerted efforts to come up with the vaccines.

The vaccines, he stressed, had been subjected to conventional safety and quality assurance processes and had received the approval of the World Health Organization (WHO) and other relevant bodies.

He said: “I want to assure the people of Akwa Ibom State that the vaccines have been put through conversational safety and quality assurance processes and was largely approved by WHO and other relevant bodies

“We started administration of the vaccine on health workers and l want to assure you that we have not gotten any report of life-threatening side effect”. he assured

The State Commissioner for Health, Prof Augustine Umoh had earlier declared that the vaccination was the last hope against non-treatable diseases and viruses.

He urged the people to step up the speed by accepting the vaccination as a modality to control the spread as well as protect oneself against contact or against the worst form of the virus.

Highpoint of the event was the vaccination of the representative of the governor and Secretary to State Government, Dr Emmanuel Ekuwem and other top government functionaries as well as security chiefs.

How To Stop Mice From Eating Pea Seedlings
6 hours ago

How To Stop Mice From Eating Pea Seedlings